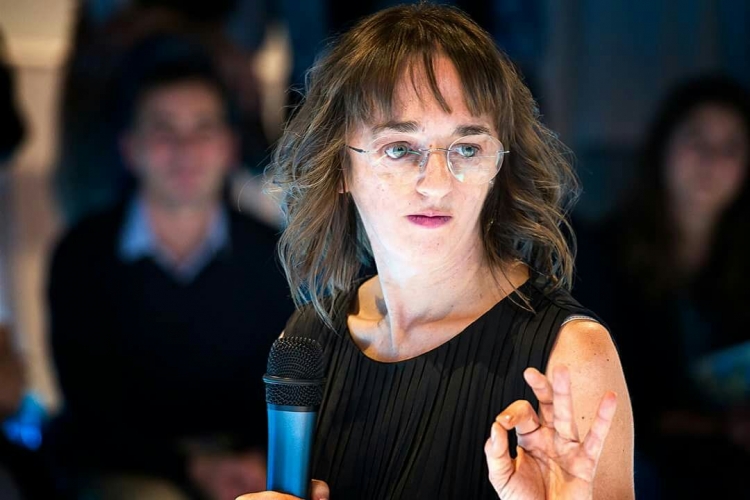 Every Person Has Its Own and Unique Beauty. When I Look in the Mirror I like What I See. Its Important to Accept and Love Yourself

Vicky Bendito, one of the models in the pictures at the Give me five senses exhibition in Circus by Borja, tells us about this syndrome and the purpose of the exhibition.

According to the Spanish Federation of Rare Diseases, the Treacher Collins Syndrome is a rare disease, congenital, incapacitating and incurable which can spontaneously arise during pregnancy or be inherited. 'The disease is produced due to a gene mutation during pregnancy, therefore it can happen to anyone. There's also 50% of chance to inherit it if your parents suffered from it' explains Vicky.

The syndrome causes multiple malformations and is characterised by craniofacial abnormalities due to incomplete development of certain parts of the cranium. Although there are no conclusive figures, it is estimated that the syndrome affects two out of every 10,000 newborns. In Spain it affects about 200 people. 'People with Treacher Collins are physically similar. We are born without cheekbones, with a narrow pharynx, small jaw... The disease affects sight, hearing, taste and smell. Almost all five senses.  That is the explanation to the name and purpose of this exhibition by Ana Cruz. With it we seek to claim our right to enjoy life with all five senses' she says.

Vicky also explains that treatment for Treacher Collins is really expensive, and not all families can afford it. We need many surgeries in order to have a better life: cheekbones surgery, jawbone surgery... Hearing aids cost 6000 euros and you never know when they will break. We also want to raise awareness on this disease, so that we can get more help to cover the treatments we need.

In addition to being a model in the pictures for the exhibition, Vicky Bendito is one of the most active members of the Spanish Treacher Collins Association, to which about 30 families in Spain are currently members. 'I recommend those affected by the syndrome to join the association. The best thing about the association is to be able to fight together for a common cause and also the support, the sharing of doubts and fears. In addition, she adds, 'Parents of children with Treacher Collins feel much better when they join the association and realise how the members can be independent. All the fears go away.'

'When I said I wanted to be a journalist, people told me that I couldn't because I was deaf and could never work on television because of my appearance. They would say that to me, face to face.' Although there were rough times, Vicky never gave up her dreams. 'I wanted to be a journalist from eighth grade, when we were asked in class to observe something of the neighbourhood and tell it. At that point I decided I wanted to be a journalist and spend the rest of my life telling stories. And that's what I did!' Today, Vicky is 46 and has over 23 years of experience. She worked as a journalist for the Servimedia news agency covering the Court, Society and National sections until 2014, when she joined Ilunion.

Vicky tells us that her parents played a key role in her achievements, because they always treated her as a capable person. She spent a short period in a special school where she learnt to speak correctly, but then her family sent her to a normal school to continue her studies. 'My parents really worked on my self-esteem. They always told me that I could do whatever I wanted. When a child with a disability knows that his parents support him, she goes all for it. That's how a child learns to not setting limits for himself.'

But it obviously wasn't a piece of cake all the time. Vicky was always aware of her disability and, even though she studied normally, she had to always find tricks.  'In college I'd sit in the front row so I could read the teacher's lips.' However, the great difficulties were not my physical limitations, but the prejudices that she sometimes found in other people. 'Working as a journalist I've met people who wouldn't understand that I needed them to speak clearly or try to talk to me by looking me in the face. It's unpleasant, but it doesn't happen very often.'

According to Bendito, one of the problems in society today is that 'there is no awareness of disability capacity. 'Disability doesn't mean incapacity. Disability does not prevent you from working as long as you have a work environment adapted to your functions' she says. Another barrier that also affects people with Treacher Collins, says Vicky, are beauty standards. 'In teen years it's hard to accept that you don't meet the standards. But I would tell young people that every person has its own and unique beauty. When I look in the mirror I like what I see. It's important to accept and love yourself.'

In the future, Vicky would like to work on television and sing in a choir. 'I've been very lucky because I've always done what I liked and learned from my work and my colleagues.'

Circus by Borja is a space located in Oviedo [Spain]. Promoted by ONTIER, this project was designed to become an open space to share knowledge and experiences through conferences, workshops, panel discussions and meetings. The space is totally independent from the firm, since it can be visited by any company, organisation or foundation. However, it’s also part of the firm, since it was ONTIER that created and promoted this project.

Everything shared at Circus is unique: conferences, book presentations, training sessions, workshops, fashion shows… And the facilities are unique as well, comprising a forum and a theatre. ONTIER CEO Bernardo Gutiérrez de la Roza explains that 'Circus is a multidisciplinary space that inspires joy, freshness, good vibes, innovation and avant-garde. A space that encourages the visitor to speak out and listen. A space that is home to entrepreneurs that look into the future.'