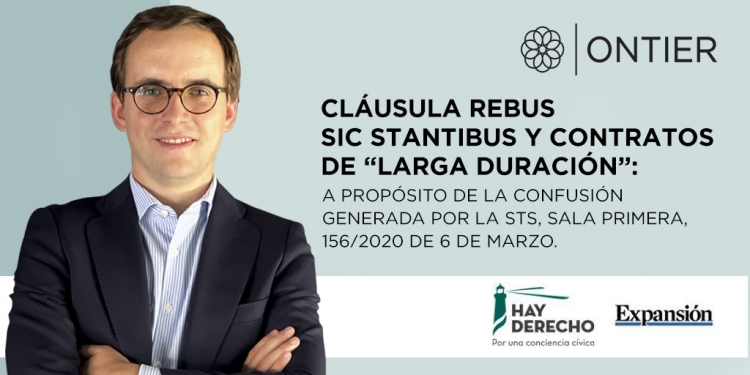 Miguel Fernández Benavides, lawyer in the Litigation and Arbitration Department and editor of the prestigious legal blog Hay Derecho published by the newspaper Expansión, has published an article in which he analyses the application of the rebus sic stantibus clause in long-term contracts in relation to the ruling of the Spanish Supreme Court's Civil Chamber 156/2020.

Miguel Fernández Benavides states in his publication that 'a careful reading of the aforementioned ruling is enough to conclude that the Supreme Court has never established that, among the requirements for the application of the rebus clause, the contract must be long term. Among other reasons, because it would make no sense to have done so without first defining what is to be understood as a long-term or short-term contract.

Thus, he continues, 'beyond the more or less fortunate wording, what is certain is that, if we stick to the literal wording of the ruling, the Supreme Court sticks to the obvious, with which we fully agree: that in a long-term contract it is more likely that there will be an extraordinary change in circumstances that could give rise to the application of the rebus sic stanbitus clause.'

Miguel Fernández Benavides points out that what was decisive for the Supreme Court was not that the duration of the contract that was the subject matter of the dispute resolved by the ruling 'extended over one, two or three years, but rather that the contractual distribution of risks did not allow in the specific case to speak of an extraordinary alteration of circumstances, although in any case, it is unquestionable that this ruling introduced a new debate in rebus lawsuits, by making a difference between long and short term contracts.'

In his opinion, the author concludes, 'although it could be erroneously interpreted that the reference to long term would have implied a new requirement for the application of this figure, the truth is that we would not be dealing with a determining or decisive question either, insofar as STS 156/2020, of 6 March does not constitute jurisprudential doctrine (art. 1.6 CC), and therefore, it should not bind judges and courts.'

The full article is available here.