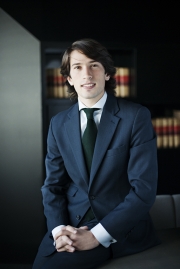 He joined the Oviedo ONTIER office at 2011 and he was incorporated in Madrid headquarters in September 2012. He has also worked in the M&A departments of the Lisbon ONTIER Office (2013) as well as in the London ONTIER office (2014).

Although focused in M&A, he has touched a wide variety of areas of practice such as Capital Markets, Corporate Finance and Private Equity.

His experience is also extended to the academic field, as he is a collaborating teacher of the IE and of the University of Navarra, and in 2016 he has completed with honors his dissertation work in Cross-Border Mergers in the University of Oviedo.