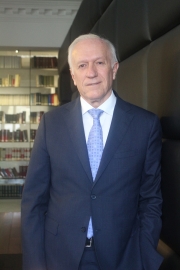 Agustín Azparren was appointed Judge in 1980 and Magistrate in 1983, as well as Public Prosecutor, but decided to take a leave of absence from said duties. He was President of the Association of European Judges for Mediation (GEMME Europe) and its Spanish division (GEMME Spain). Now he is President of the Asturian Institute for Mediation. He was also Senior Judge-Magistrate at the Oviedo Court and member of the General Council of the Judiciary, member of the International Relations Committee and the Disciplinary Committee.

Now he combines Law with teaching, as a Professor in the MA in Mediation of the universities of Santiago de Compostela, Cádiz and Oviedo, and also of the bar associations of Oviedo, Murcia and Córdoba. He also taught lessons in the European University of Madrid and the Asturian School for Legal Practice.

Azparren is also President of the Civic Platform for Legal Independence and member of the Board of the Alonso Martínez Institute for Justice and Litigation (Carlos III University of Madrid). Hes published several technical articles and authored several books on European Law and Consumer Advocacy.

Born in Tenerife and settled in Asturias, Agustín previously worked at another law firm acting as International Partner within the Consumer Advocacy and EU Law Departments as well as the Mediation division.

Agustín joined ONTIER in 2017 to head and develop the Mediation area, working from the Oviedo office. He also joined the Litigation team to carry out high-profile duties as well as take part in business development tasks in Spain and Oviedo.
Given his personal and technical excellence within the sector, Agustín Azparren joined ONTIER as a Counsel of the firm.