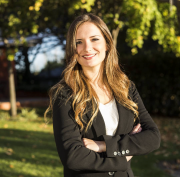 Candelaria has a Law and Political Science degree from the Pablo de Olavide University of Seville and Master's Degree in Access to the Legal Profession from the Carlos III University.

She started her professional career in the litigation department of MAIO Martínez Escribano and in 2017 she joined the Litigation and Arbitration Department at Deloitte, advising both national and international companies, in civil and commercial contracts, as well as assuming the legal representation of all kinds of proceedings, being significant the legal direction of proceedings in the field of banking claims. In 2019, she joined as a member of Abengoa's Legal Department, advising group companies, mainly from French-speaking countries, on O&M contracts, project finance management and drafting and reviewing PPAs, MOUs, SPAs.

Candelaria joined ONTIER in 2022, as part of its Litigation and Arbitration department.

She is a member of the Seville Bar Association.

She speaks Spanish, English and French.