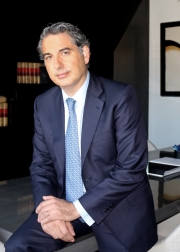 Bernardo Gutiérrez de la Roza Pérez is the founder and CEO of ONTIER, and was managing partner until 2012.
He has a bachelor´s degree in Law from the Universidad de Oviedo and an Executive MBA from the Instituto de Empresa (IE). Currently, he teaches Family Business and Restructuring and Insolvency at the IE. He is also an experienced adviser in the area of Business Law, including mergers, acquisitions and corporate restructuring.
Bernardo Gutiérrez is ranked among the top lawyers of the best legal rankings in the world. Chambers Global & Chambers Europe 2015 placed Bernardo in Band 2 in the area of Restructuring and Insolvency in 2015. Also, he has a thorough knowledge of the energy sector, especially at the field of renewable energy.
Bernado is also an adviser at the Spain-U.S. Chamber of Commerce, at the Asociación para el Progreso de la Dirección (APD) and at the Federación Asturiana de Empresarios (FADE).